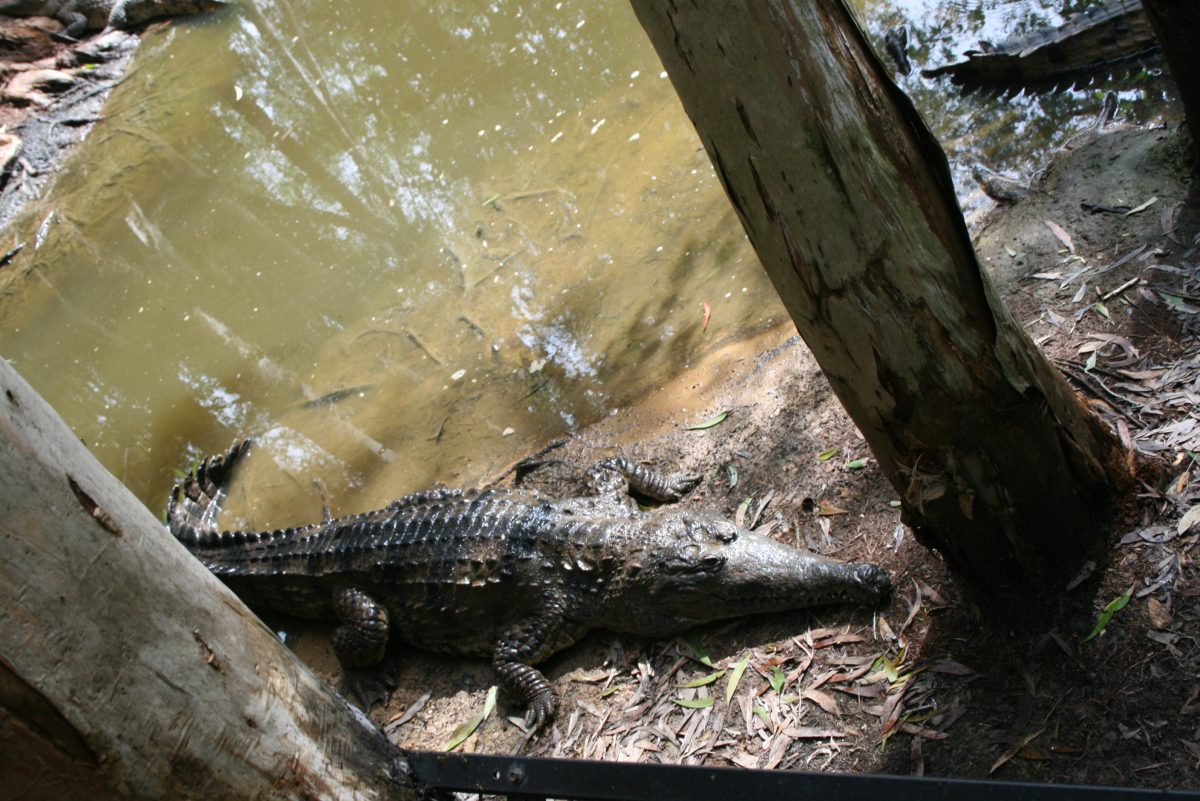 Today we head to Hartley’s Crocodile Adventures, we arrived at 830am and end up on the 850am boat around the Lagoon.

While on the boat, you could see Crocs everywhere and it is a very eery feeling…

The guide explained that the Alpha male in the lagoon was missing the front arm. Whilst the boats were on tour, they were feeding Bruce, when another croc came up and bit off his front arm.

Apparently, Bruce was out for more boats 20mins later. I can only imagine how the people on the boat that witnessed the that felt…

This park is the biggest, but it makes up for it in informative displays and very welcoming staff.

Our first session of the day was the Snake show. This was a particularly good show with lots of information about the snakes on display. Wow the brown is huge and to be honest. Not my cup of tea….

After this show was the Crocodile show, there was feeding up close and information about how they interact with each other, the girls decided to have a bit of a fight.

Hiding below the walkway was a hidden big male. Not a ripple was seen till food was dropped. OMG…..

We had paid in the morning for the boys to feed the freshwater croc’s, this is something you usually think well that is money spend and no value. Hartley’s did not deliver that; it was the best money spend.

The boys got to hand chicken heads over the water and entice a freshwater croc to jump and snap the chicken.

To see their faces when the snap happened was worth every cent paid.

Lucky for us they put an extra show on for the Croc display and we headed to main area to watch this one as well. I ducked back out of Hartley’s to the car for our lunch and headed back in.

The show was great, and Hagrid is not a happy camper.  You really do end up with a new appreciation for these animals, but I still would no want to meet them anywhere else but at one of these parks.

After the show, we race back for the tour of the Croc farm. Hartley’s farm Crocs for the leather, but we were surprised to here that there is 0% waste of the animal.

Christian has decided he would like a photo with a koala and Maarten a snake. So off we go to have these taken. We have some free time now to walk around the rest of the park to see the other animals.

The boys loved all the different animals in the park and the read every signboard around the park.

3pm was the Croc Attack show and is a great show. The boys were at the edge of their seats and never made a peep through the whole show.

This park is worth every cent and the extras are not just money grabs but life experiences worth it for the memories we have taken away.

Whenever you are in the Cairns / Port Douglas area, put Hartley’s on your itinerary.

Put aside a day for it you will need it. Hartley’s Crocodile Adventures | Facebook