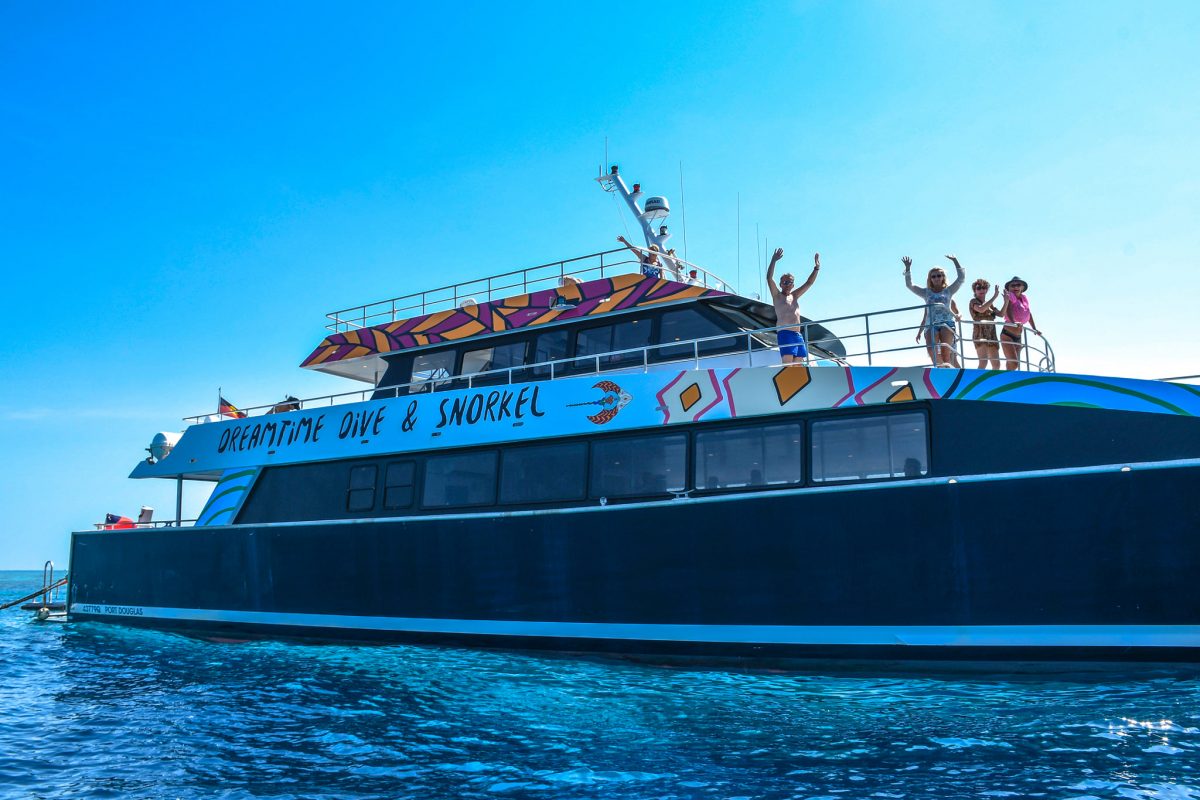 So this was the biggest attraction decision we made on this trip.

While sitting at the Lagoon in Cairns, we checked out the different options for travelling to the great barrier reef.

We stumbled upon an option for a cruise that was different to what was on offer from all the rest.

Dreamtime Dive and Snorkel tours popped up and we decided to read more about what this entailed. http://www.dreamtimedive.com/

So, with the indigenous learning on offer we booked this tour. To say the boys were excited was an understatement.

We arrived at the wharf about an hour early for boarding.

Check in was a breeze and on offer was a snorkel session with a marine biologist, bookings were made and the boat found.

Once boarded the boys were fitted out for suits, flippers and snorkelling gear and seats found, ready for the day’s adventures.

There was only 22 people on the cruise and plenty of room to spread out and our lovely hostess offered us coffee and tea. We found the muffins and OMG they were out of this world.

As we got underway, there was a welcome and acknowledgement from the sea rangers and we learnt about the staff, their heritage to the area.

There was a safety briefing for the day next was aa demonstration by the sea rangers on fire lighting.

In the third session, how The Great Barrier Reef was formed and was by the marine biologist, we also were told the indigenous story by the sea rangers.

To say I learnt a lot more about indigenous culture on this trip would be an understatement. I think I got a much better understanding of a small amount of the culture. I have to say this has left me wanting to learn a whole lot more..

And they are off Snorkelling

To the big ticket of this trip, the reef. The captain gave a site brief and the race was on for the water. I was hoping they would take a noodle but nope, they were in and took to snorkelling like fish to water LOL.

The boys watched the divers go down and suddenly, they were diving as well. They saw sting rays, heaps of fish, shark, turtle, sea cucumber, a lionfish and plenty of coral.

The whistle was blown and the water cleared, time for to move to the second site. The staff showed the kids how to bomb of the back deck and they had a ball…

At the second site we had to hold them back as lunch was out, the food was lovely, there was a chicken curry and rice, vegie lasagne, fresh prawns, potato salad, mixed salad and fruit salad.

So as soon as possible the boys were off back into the water. I have booked them on the second tour with the marine biologist and the sea rangers. Worryingly, this one took them further away from the boat.

You would think after swimming on the reef for nearly 5 hours they should be tired, but no they were were jumping of the back of the boat with the sea rangers.

Once the boat was underway again, it was time for afternoon tea which was chocolate cake, I have never seen 2 boys eat so much cake…

The staff brought around shields to show how these are painted and the story they represent.

To varnish the shield, it was explained that tree sap is mixed with blood to form protection. So this is why indigenous art is so sacred to them, the blood could be from animal but also human, so can be from their ancestors.

“See you next time“

On arrival in Cairns, an invitation was given to met on the back deck for a “see you next time” as the staff told everyone, there isn’t “Goodbye” in native language, but rather see you later.

As we docked you could see the other tour boats arriving did not receive this ceremony, they stood on there boats and all they got was thanks for coming.