QLD TO VICTORIA – Free camp luck and running out of fuel. 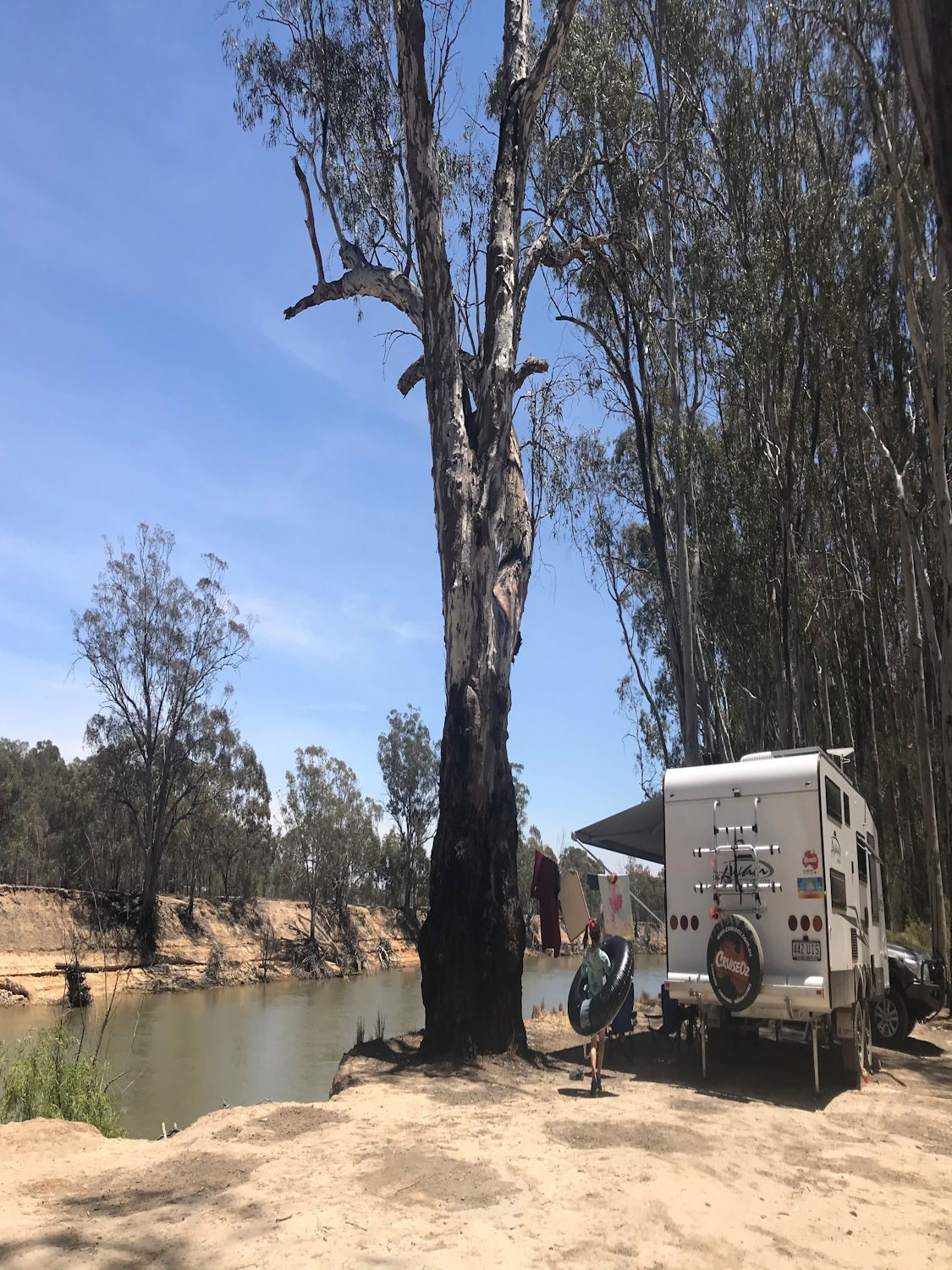 We are two weeks in to our Big Lap and we have done 3278 kms and haven’t looked back!

The first leg of our trip was heading straight down to Victoria from Queensland stopping a few times along the way, taking our time. Our first night we were super excited to try out a free camp near Moree called Tareelaroi Weir, taking us off the main highway, the photos on Wikicamps didn’t look too bad.

Having spent a fortune on solar and batteries, we wanted to free camp as much as possible and our bubble was well and truly popped when we drove down a corrugated dirt road and came to a broken down, dirt clearing that didn’t look anything like its photos in wikicamps.

We looked at each other and thought bugger this and headed back into town, it looked a bit too dodgy.

It was getting quite late and we found the Showgrounds just before they closed the gate for the night. We spoke to the caretaker and said we needed a site but didn’t need it be powered, mind you it had been a 43 degree day and hadn’t cooled down much at 8pm.

He looked at the girls and gave us a powered site for the price of a non-powered site so we were stoked and hooked up for the night.

As we headed out of town, we stopped at the CSIRO Compact Array of Telescopes near Narrabri, NSW which was pretty cool and had lots of info about how the telescopes work and what they are researching. Going to write that down as schooling for the day – winning!

Between Dubbo and Forbes we detoured slightly following a trail of paddock art through the farmlands which was fantastic! Many kilometres of animal artwork made out of metal and scraps, definitely kept the kids entertained and we stopped for pics along the way.

We left Dubbo looking at our fuel and thought, yip we have enough to get to the next town where our Fuel Map app showed us there was a servo. We got into town and the only thing that was open was the pub, of course, and it was at this stage we looked at each other and thought… crap!

We were on E and we had about 70 kilometres to go to reach Forbes and honestly thought we weren’t going to make it. It was 47 degrees outside, we turned the air con off, closed the windows (apparently something to do with aerodynamics 🤦‍♀️) and crossed our fingers and toes.

The fuel light came on with about 50 kilometres to go and with the heat we had that day we decided to call RACQ and get someone to come out to us before the situation got worse. Phone reception kept dropping out as we were speaking to them and by the time they called us back we were driving into Forbes with a BP in site and the biggest smiles on our faces. We had made it by the smell of an oily rag we reckon and celebrated with ice cream.

It was in this moment the Landcruiser was christened, Lucky Lucy, and she got kisses form everyone💋💋💋💋💋.

Next stop was a beautiful free camp next to the lake in Forbes called Wheogo Park. Tidy and shaded by trees it was a great spot to park up for the night. We woke up to dragon boats out having a morning practise, dressed in xmas attire, entertaining to say the least.

Just before we left the next day we had a visit from a lovely local lady handing out Xmas chocolates, much to the girls delight, and thanking us for coming to Forbes.

We had to make Dingee, Victoria for Xmas Eve with family so decided to stop for a few days near Echuca to chill out and repack the van. Stopping near the Big Murray Cod we gave it a kiss, as you do, and the kids cooled off at the water park because we had another 40+ day and we were all sweating.

We stocked up and headed out to the Murray River and found a gorgeous free camp right on the river bank called Christies Beach. Across the river we had the stunning sun set, along with the hum of the ski boats every now and then, it was a great place to relax and catch our breath.

Along the river there are spots everywhere, I really don’t think you could go wrong. Steve grew up near Echuca and it brings back many great childhood memories for him. I swear every time we come we are here for five minutes and there is mention of getting a boat. One day hubby, one day.

The kids found some steps carved out of the river bank down to the water and happily explored, climbing up and down all afternoon while we sat up top with a beer watching the sun go down.

Steve tried his luck at fishing, we had chicken for dinner.

We relaxed here for a few days and the van was starting to feel like home, having the time to make space for everything after a big few days of driving.

Xmas Eve we headed into Echuca and found the Rotary Park where we could empty the toilet (This was not on Wikicamps) because it was about as full as we could get it, and we headed off to Steve’s mums for Xmas.

We had driven through three states over 4 nights and learnt a lot along the way:

Heading to Phillip Island next and then onto the Great Ocean Road, so much to explore!